Meredith Music Festival began in 1991 as an end-of-year party for about 200 people. Golden Plains came into existence in 2007.

Both iterations remain independent. Three of the four original organisers are still involved in the organising. The fourth still comes along every year, just for fun.

The festivals have been self-funded since the beginning and both have a ‘No Commercial Sponsors’ policy. Neither Meredith in 2020 and 2021 nor Golden Plains in 2021 and 2022 have been able to be held due to the COVID-19 pandemic.

In 2021, the festivals were awarded grants from the state and federal governments.

In January, Meredith received a Creative Victoria grant from the Victorian Music Industry Recovery Program, to support workers to remain engaged via a number of professional development and training activities.

In May, Meredith received a Music Works grant from Creative Victoria to help reactivate the festival. When the 30th Meredith takes place, funds awarded in the grant are allocated specifically to Victorian artists, creatives and creative workers.

In July, Meredith and Golden Plains were among 328 Australian arts organisations to be awarded a grant from the Australian Government’s Restart Investment to Sustain and Expand (RISE) Fund. More about RISE can be found here.

We are grateful for the support of both Creative Victoria and the Australian Government.

The Victorian Government’s Live Music Restart and event interruption insurance are excellent initiatives and will help the festivals return when the time is right – starting with Meredith in December 2022.

We are also mindful that many arts organisations and, in particular, arts workers urgently need support – ongoing, targeted, reliable support. 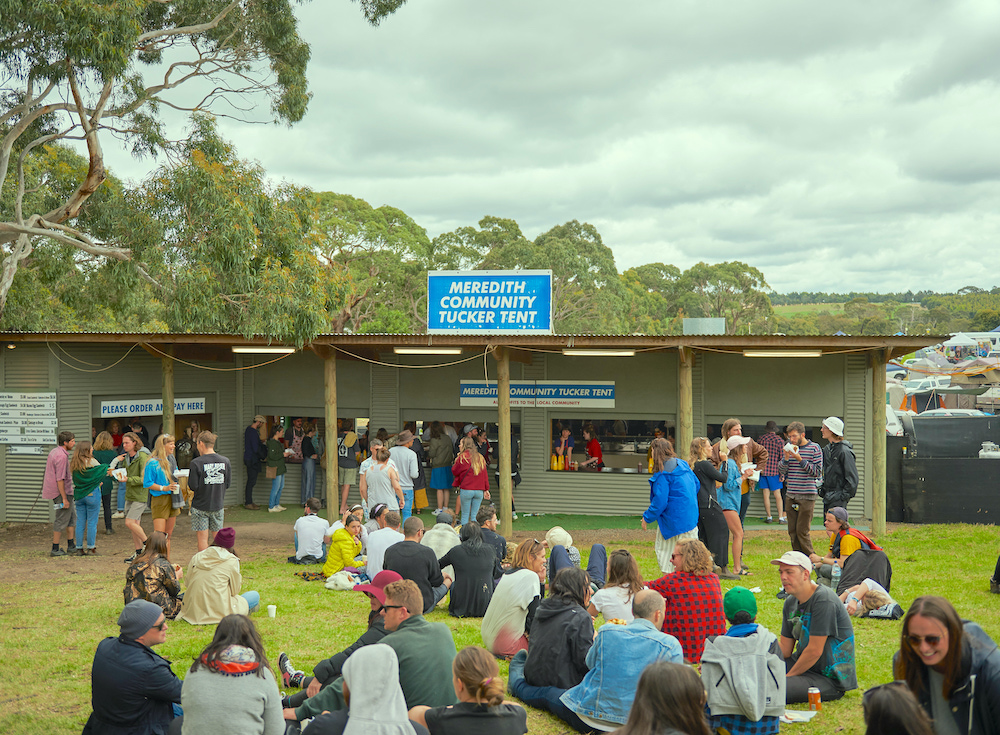 We very much look forward to being able to stage the festivals again. When we do, Meredith and Golden Plains can continue to be a source of support and funding for various community groups, as has been the way since the 1990s, particularly via the Meredith Community Tucker Tent.

The Tucker Tent is the Meredith Supernatural Amphitheatre’s largest food stall, and is run by local volunteers, with all proceeds going to several community groups. Every time you feed yourself at the Tucker Tent you do good things for over 15 groups around the district, including the primary school, kindergarten, the hall, and various sports clubs.

Several other local community groups also raise funds by providing excellent volunteer services to help with the smooth operation of the festivals, including in cleaning, waste and logistics. Every time you buy a ticket you do good things for over 40 community groups. It is a wonderful arrangement.

You can purchase the Meredith Community Tucker Tent Apron or T-shirt, with proceeds benefiting those local groups in the absence of the festivals, at the online Supernatural Gift Shoppe.

We look forward to welcoming everyone back to The Supernatural Amphitheatre, postcode 3333.