A Potted History of the First Decade

So said Aunty Meredith, after ruminating on the idea of Golden Plains for some years, and threw the gates open in March 2007. 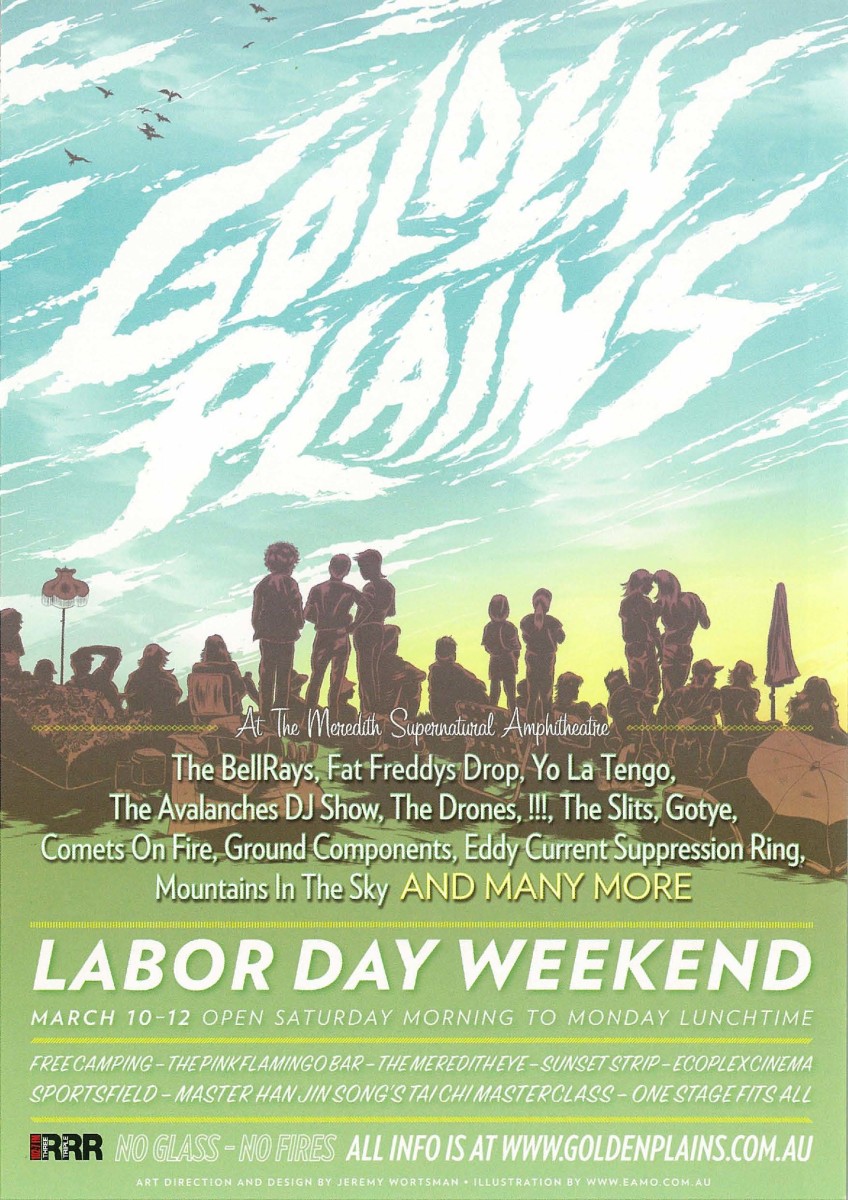 Autumn was such a beautiful time in the Supernatural Amphitheatre, more people wanted to go to Meredith than she had room for, and after fifteen years of Meredith and all it entails, the idea of starting something new and different with no expectations was wildly appealing.

Golden Plains was always to be a size or two smaller than Meredith – deliberately so, despite having the space, the facilities, the know-how, the demand and indeed the permit for several thousand more people, Aunty stuck firm – Golden Plains was to be smallish but perfectly formed. Like Meredith, GP was to have no commercial sponsors, a No Dickhead Policy, a One Stage Fits All The Good Stuff Policy, and would be BYO. She was named Golden Plains after the Shire she resides in – Meredith is the town, Golden Plains is the shire.

Apart from that, there was no other grand plan. Golden Plains was to evolve naturally.

The very First Golden Plains featured, amongst others, !!!, The Bellrays, The Avalanches, Yo La Tengo, Fat Freddy’s Drop, Eddy Current Suppression Ring, Comets On Fire, The Slits and The Drones.

‘The Opening Ceremony’ featured co-founder of Meredith and Golden Plains Chris Nolan, whose family farm hosts both festivals, and who suffered a life-changing multi-organ collapse in 1997 and can’t really move, see or speak, though is thoroughly aware of what is going on around him. Chris now communicates largely through long blinks, vocal sounds and facial expressions. He was to issue a long blink, to give the signal for Golden Plains to begin. He did, in fact he nearly blinked his head off, at which his father Jack drove an old fire truck into The Sup’ and sprayed everyone with water (bore water, being a drought) to ‘baptise’ the festival:

A ‘blessing’ was written and recorded by legendary broadcaster Stephen ‘The Ghost’ Walker which was blasted through the PA:

“Welcome to Golden Plains, a multi-dimensional musical portal where invention, inspiration and imagination converge, with you at its centre.

Surrender to the music; it’s the sound of Victory, a triumph of the senses…sight, sound, touch and smell.

The very first artist to perform at Golden Plains? Playing one of his first live shows and certainly his first festival, was a then little-known Shepparton artist: Muscles.

How The Boot Started

Also at the very first GP, one Young man was so moved by US psych rock band Comets On Fire that he held one (white) boot aloft for some time. People around him copied, then much of the crowd joined in. Who knows why. It’s now a popular tradition – The Boot is offered en masse to whichever artist(s) are moving the crowd the most, often leading to bemused looks from the stage.

George Rrurrambu, the icon of Aboriginal rock, was booked to play with his band Birdwave and would have no doubt left The Sup’ as a new hero, but was too ill to perform, pulled out, and sadly passed away a few months later.

The First Golden Plains was also sadly one of the last shows for the reformed The Slits, as founder Ari Up’s battle with cancer slowed her indomitable force. Their Golden Plains set was a riot, ending in a stage invasion of women from the crowd.

The Second Golden Plains featured another cracker lineup which included Sharon Jones and The Dap-Kings on a queen-making early Australian tour, Beirut at Sunset, The Dirtbombs, Iron and Wine (who won The Boot), Future of the Left, The Vines, Buffalo Tom, plus fledging Geelong band Frowning Clouds who, apart from jumping backstage fences, later recounted that being booked to play Golden Plains helped inspire a scene of local bands to feel bona fide.

Also, all the way from Jamaica Street, Glasgow was Optimo, playing The Sup’ for the first time. Their four-hour DJ set from 2am to dawn became so legendary that they’ve been back thrice to keep it growing.

And, Ween played. About ten years before GP existed, a ‘Ween are playing Meredith’ rumour appeared out of thin air, and grew to preposterous annual proportions. Organisers tried to make it happen, but Ween had a dislike of playing ‘festivals’. They then invited them to play for as long as they wanted, and it worked. It turned out to be two hours of astonishing wonderfulness. Afterwards, Dene and Gene sought out a couple of Aunty’s trusted nephews to say hello and thanks, then left with some passionate, wise words: “you got a good thing going here – now don’t fuck it up”.

Also on the bill at The Second Golden Plains was garage rock hero Jay Reatard, who played a wild Sunday afternoon set which drew a lot of The Boot, and, fortuitously, was recorded. Jay tragically died two years later, way too young, and his record label posthumously released the “Live At Golden Plains” LP. 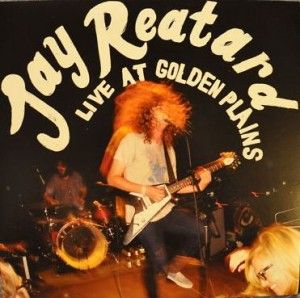 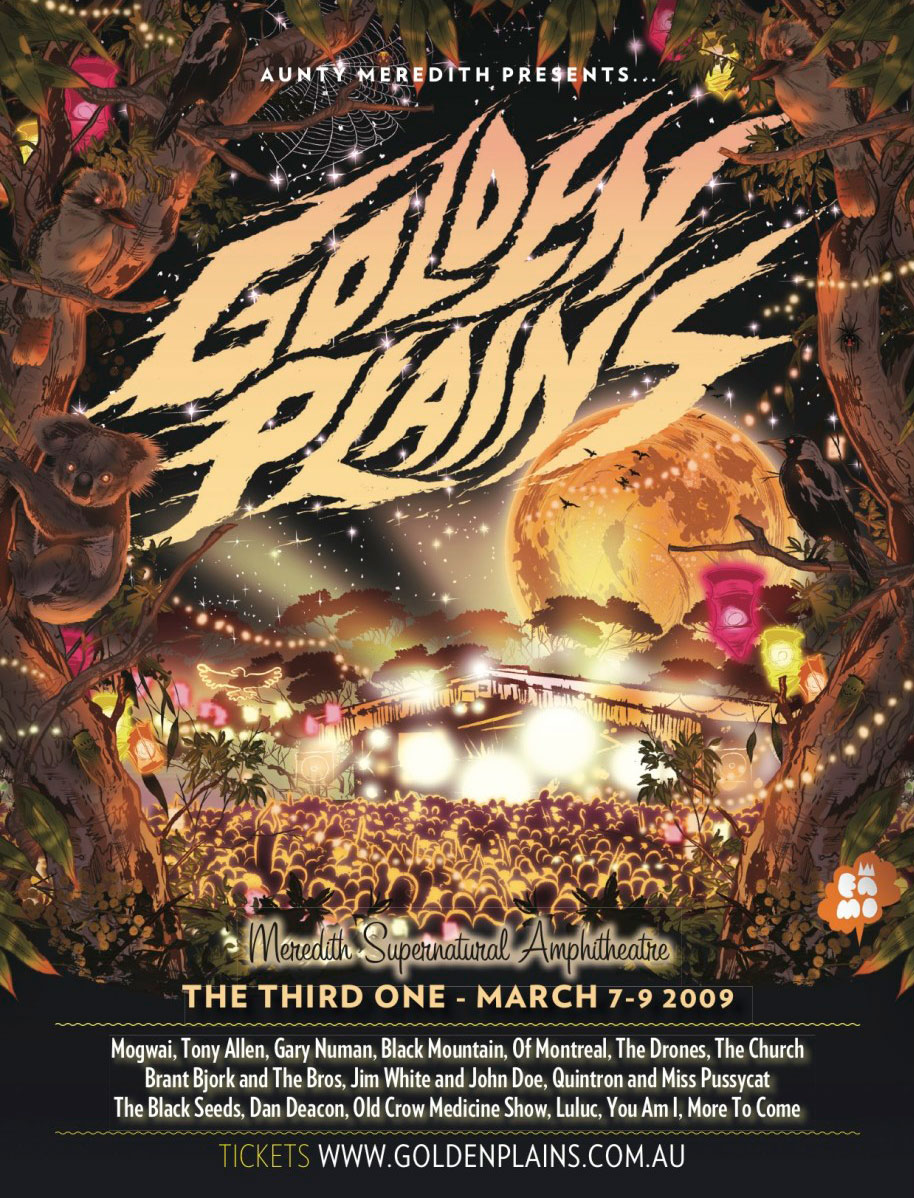 Musical highlights this year included Dan Deacon causing a sensation by playing a satellite set ‘near the Bush Camp toilets’. This was a slight variation on the One Stage policy, but was well worth it. Also on the bill: Black Mountain, Mogwai, Of Montreal, John Doe from X, The Church, founding Afrobeater Tony Allen, and Gary Numan, who turned 50 that day, and had a cake backstage baked by the festival’s Artist Services Manager’s mum.

Old Crow Medicine Show won The Boot by one of the biggest margins before or since.

Stars aligned like never before. Pavement reformed and chose Golden Plains to be their second show back after an 11-year break. 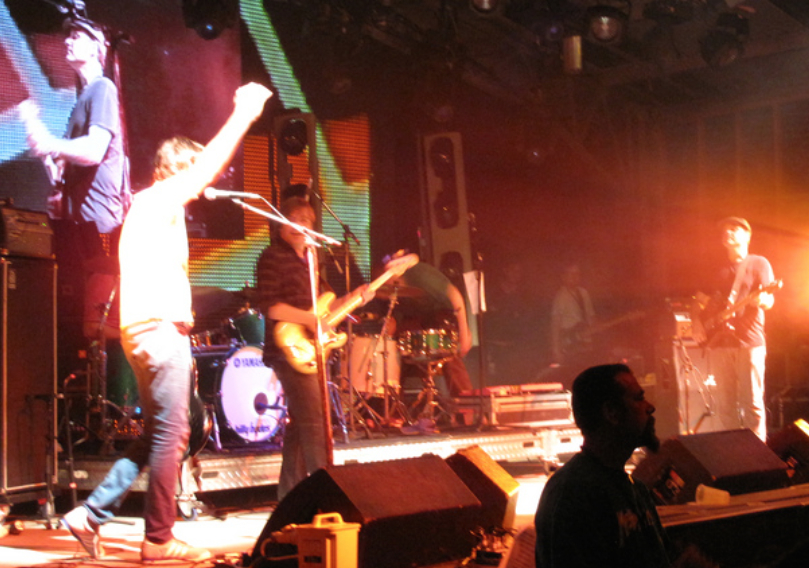 Dinosaur Jr, Dirty Projectors, Tame Impala, Wooden Shjips – who with Nashville Pussy got the biggest Boot, Anitibalas, The Cruel Sea and Calexico also played. First band on, opening the festival was Royal Headache. But despite that heavyweight roll-call, the biggest moment came just three hours into the festival.

Crazy Israeli ex-circus performer rockers Monotonix wanted to play ‘in the middle of the crowd’. Organisers decided too many things could go wrong, plus nobody would be able to see them, so instead a small stage was set up in the crowd, right up at the front.

Of course, Monotonix didn’t use it at all, except as a launching pad. They started their set by somehow getting everyone in the crowd to sit down – no easy task. Then one by one the band took their instruments out into – in fact onto – the crowd.

It started well enough but after a while things started getting a bit too loose and unhinged and before it veered out of control the plug was pulled. The band just nodded and trudged straight off to the dressing room, happy with their afternoon’s work.

2010 was the first GP Keynote Speaker: Professor Hugh McDermott on ‘Why Music Is Good For Your Brain”.

Golden Plains No. 5. Who got The Boot? It’s a little unclear, seemingly a few artists did. The Besnard Lakes, Belle & Sebastian, Imelda May, Justin Townes Earle, Jamie Lidell and Pulled Apart By Horses (with long-distance crowd surf finale) all drew footwear aloft. But there were many many other musical highlights as well. Architecture in Helsinki crowned it.

Also on the bill: Wavves, Best Coast, The Clean, the fantastical Tropicalia revolutionaries Os Mutantes, Joanna Newsom, The Hold Steady, and Hawkwind, who started with a bizarre rant about their merch, from which the atmosphere for the rest of their set didn’t really recover. 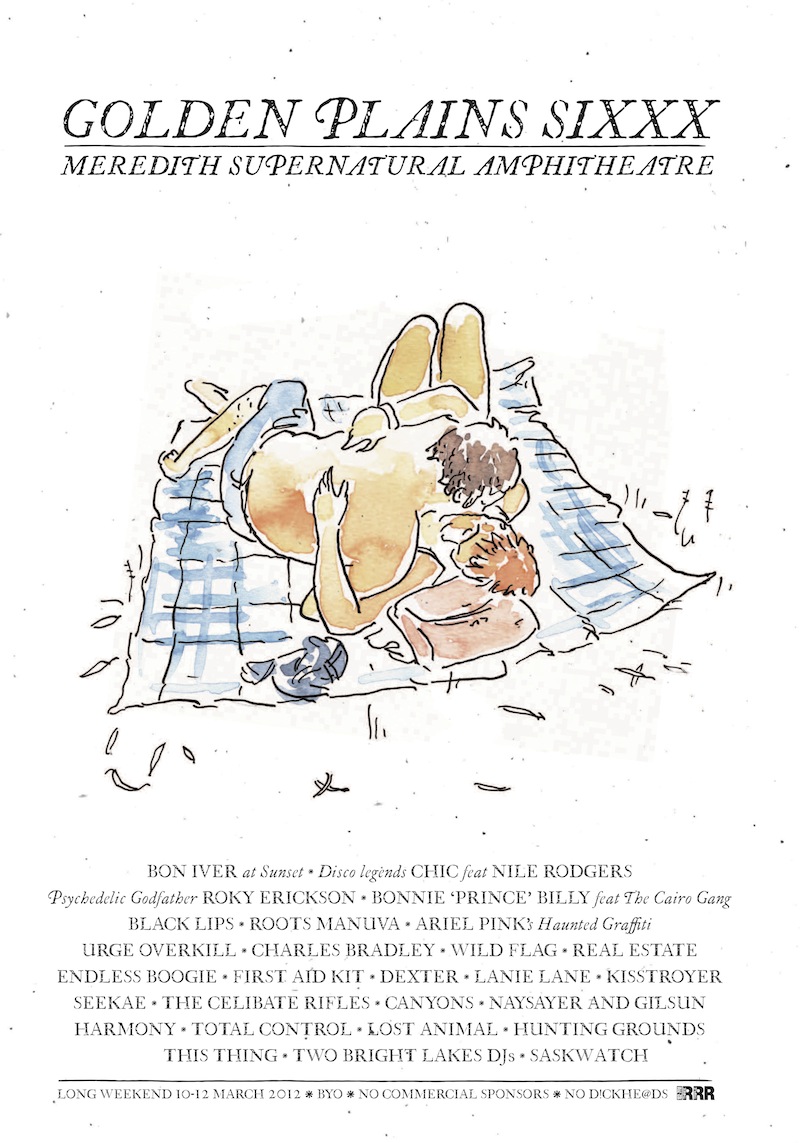 63-year old soul survivor Charles Bradley moved us – and himself – to tears:

Black Lips, Roots Manuva, Real Estate and on Sunday night, one of the best party music machines ever assembled, Nile Rodgers and CHIC. Before the current wave of recognition for Nile, he played GP and blew the place up.

Straight after the set he asked to come back and play the next year (he did return for the following year’s Meredith). 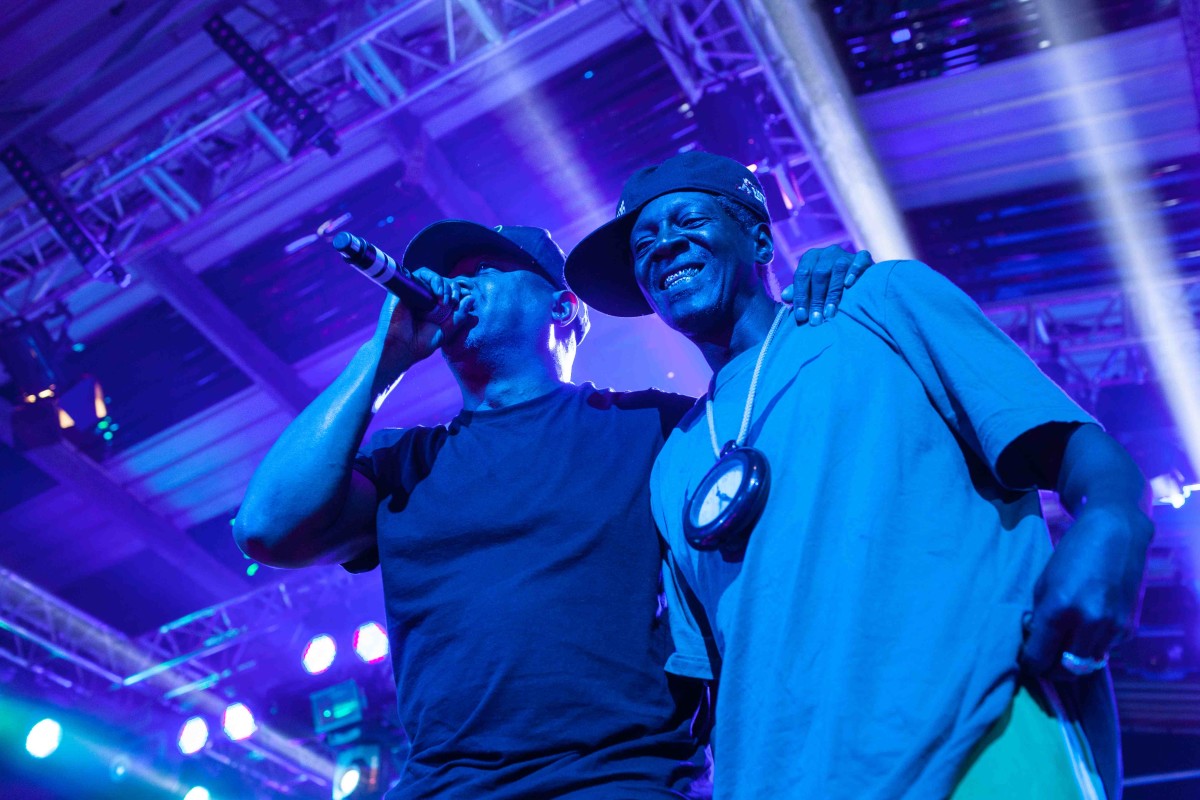 Aunty Meredith hit the sherry one night and started tweeting out the lineup one by one, which was kinda good fun for all. It was in alphabetical order, from ‘A to V’. Before ‘V’ she paused momentarily… 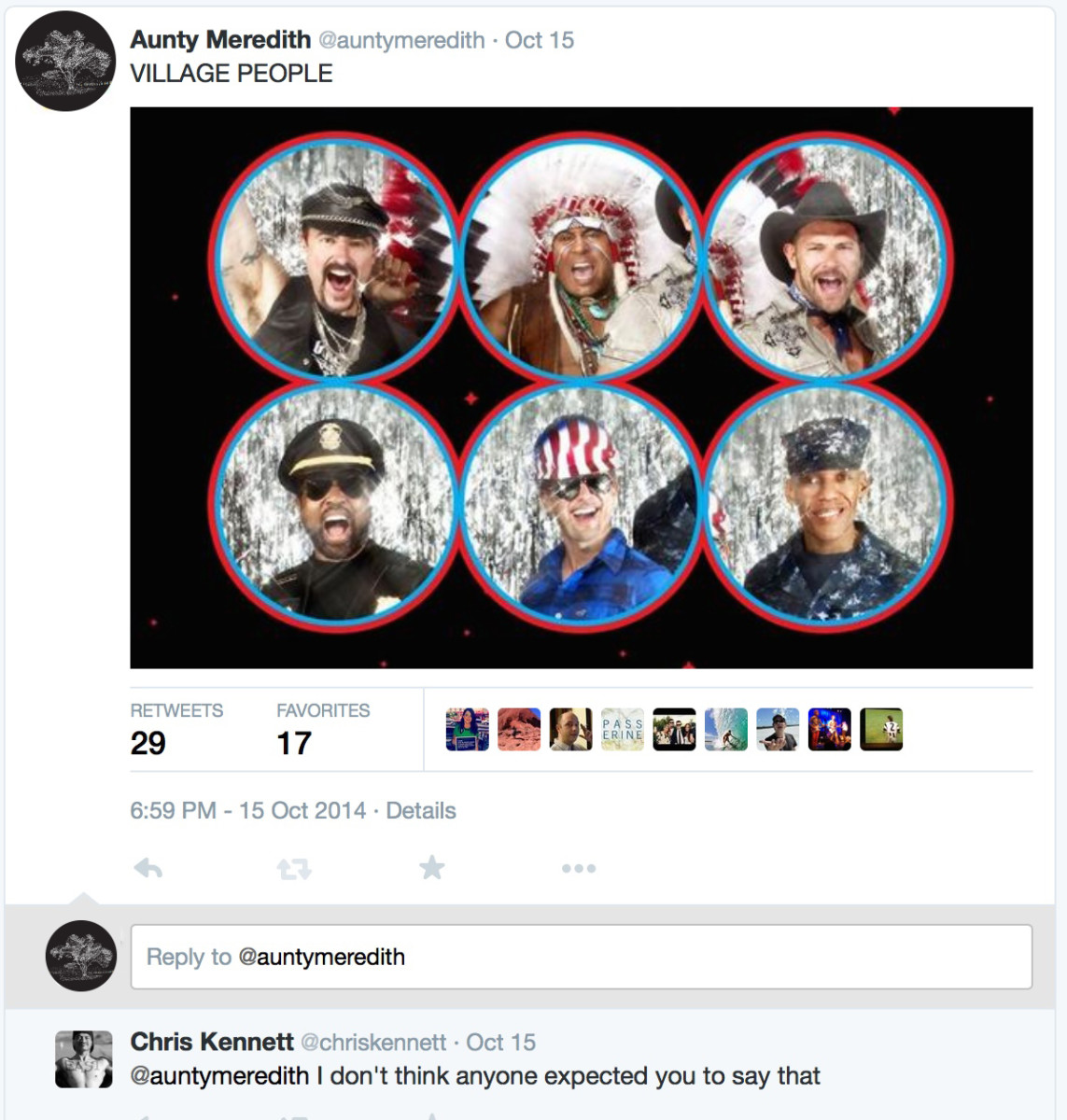 Yes, an idea many years in the making, Village People said yes and took the stage around midnight on the Sunday night to a very full Amphitheatre. When the “hey! hey! hey hey hey hey Macho Macho Maaan” part hit, the place went absolutely bug crazy. And, of course, YMCA also. Unbeknownst to the Village People, organisers had secretly hoisted a giant rotating mirror ball high above the stage roof via a large crane, and hit it with light and smoke machines, creating a giant outdoor discotheque for their set.

DJ Shadow and Cut Chemist put on an audio-visual extravaganza from midnight on the first night, Radio Birdman killed it, Neneh Cherry, Conor Oberst at Sunset, First Aid Kit at the other Sunset, Oblivians, Theo Parrish, Total Giovanni became ten times as big, and so many more highlights happened, including a warm welcome home for Courtney Barnett. 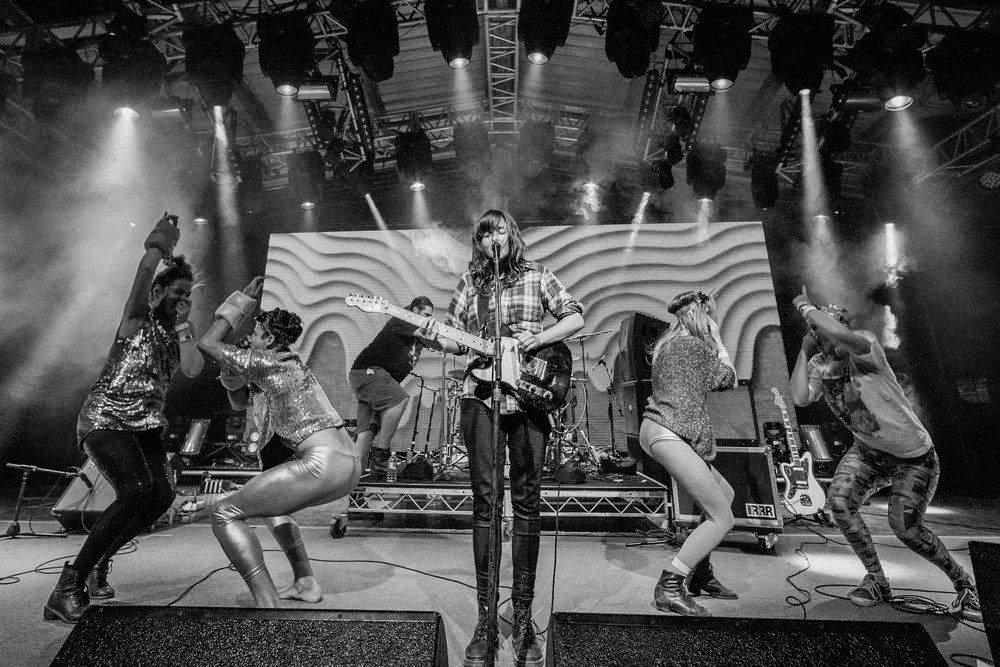 It featured – among dozens of highlights – the reunion/comeback show by Eddy Current Suppression Ring, playing for the first time in six years, and returning to Golden Plains for the Tenth Birthday after being part of the very first GP ten years earlier. 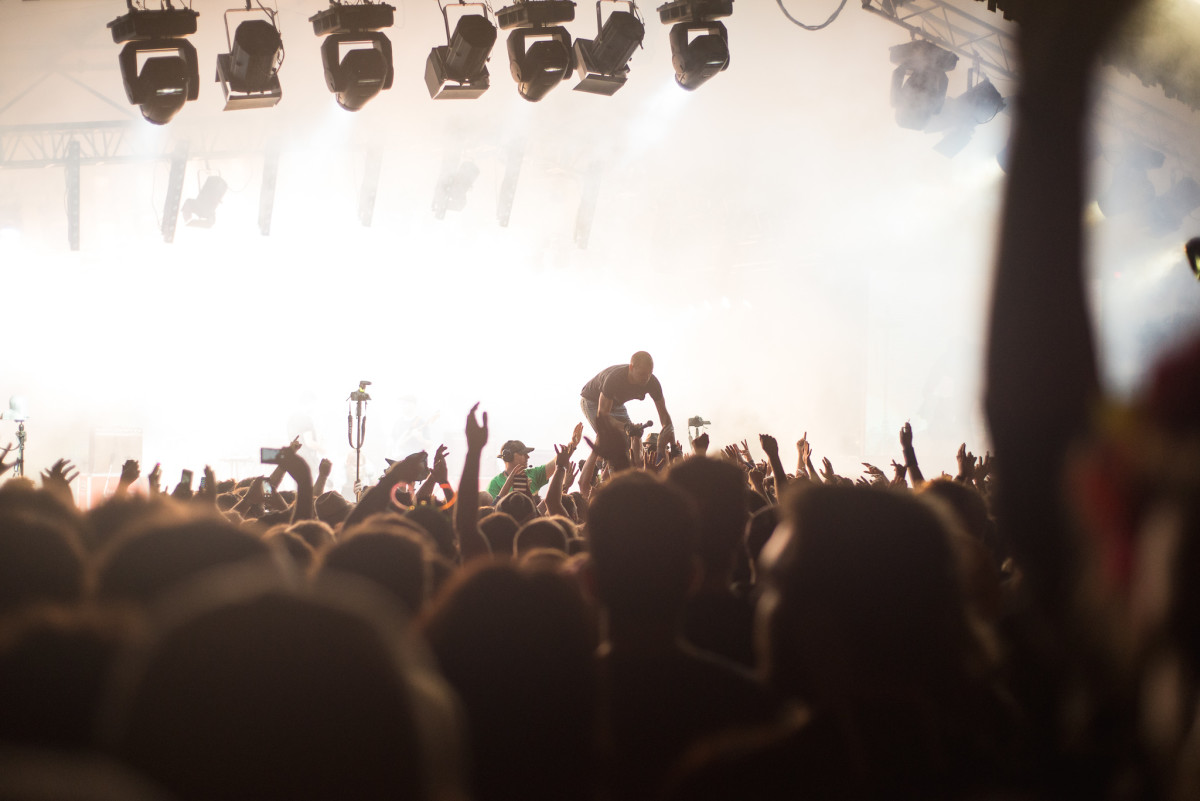 The weather was just not a factor – there was virtually nil wind, and it was neither hot nor cold – it was like the atmosphere was perfectly neutral.

GPX itself was one of the most sublime in the MSA’s history. As well as Eddy Cuz’s mercurial set, the bill boasted Sleater-Kinney, Violent Femmes (who opened their set with Blister In The Sun which caught a lot of people out), and wonderful sets from C.W. Stoneking and a mesmerising Sunday morning meditation from The Necks. Buzzcocks struck a chord with The Sup’ in the late afternoon and Songhoy Blues blazed a new trail.

All this was watched over by a giant illuminated X in the sky, marking the centre of the universe for those three sweet days. 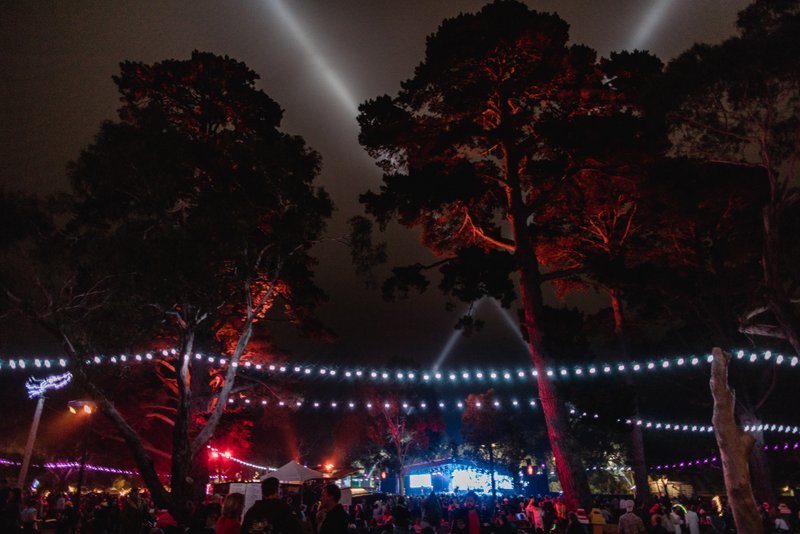 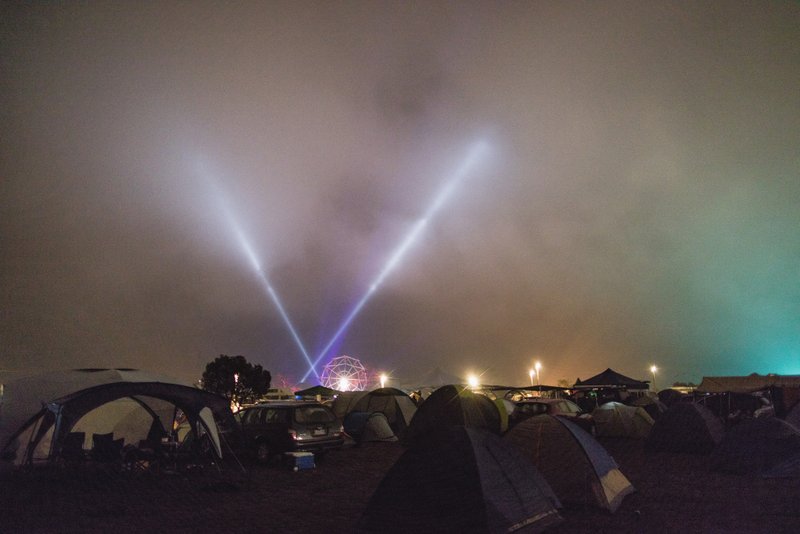